Whispers in the Warp – What Would a New CSM Update Look Like? 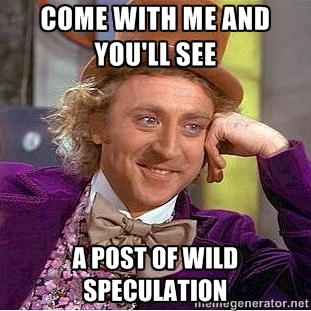 So 6th/7th edition codices will, in 2015, go full circle. But what are we to expect? In the new landscape of data slates and supplements, will we get traditional codex updates in the same way that we are used to, or should we be expecting something completely different? Let the nonsensical guessing-game begin!

There’s lots of speculative gossip on the internet at the moment (well, that kind of sums up the whole internet) regarding the armies that will get new shiny things in 2015. There’s plenty to get excited about, even if it means taking about an ocean’s worth of salt pinching with each one. Ad mech, Harlequins, Sisters… These would all be, at the very least, interesting, if not downright awesome. Necrons are due a turn given their book, though written very much with 6th in mind, is the last of the 5th edition codices and so I think we can count that as an almost certainty. 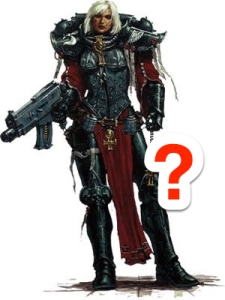 But then there’s the idea of what happens next. A lot of whispers are going around regarding the idea of new Chaos Space Marines, as well as Dark Angels and Daemons due to how long their books have been on the shelves. Let’s focus on the CSM though for the purposes of this post as we try to discern what we can expect if they do get some form of release this year (or at least have fun making things up).

What are the odds that we see a brand new codex with completely different rules, units and formations arrive? Well, if we go by the history of the game, logic, common sense and nearly all other relevant factors, you’d have to say the odds are pretty good. However, the gap between a new book and the last one would be far shorter than we’ve seen before. That doesn’t really change the feasibility of the notion but it does mean that the option to change this style up a bit is more forthcoming. What’s more, GW have definitely been in a changing-things-up frame of mind of late. 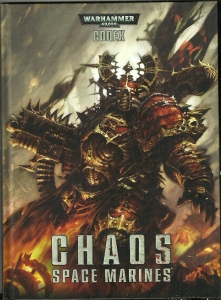 Each new book essentially requires a large amount of four things – new models, new artwork, new fluff and new rules. Or does it? The Grey Knights got a new book with no new models in sight, as did the Inquisition. The libraries of fluff and artwork that GW now has in its vaults are huge and easily recyclable and more is being produced all the time. There are FAQs and Errata that can incorporated and it wouldn’t take too much effort to incorporate these updates. What if instead of a truly new book, we got a second edition of the current book? Would it sell?

So say we either retained the current CSM book, or got a second edition of said book, what about the ideas of data slates and supplemental codices? Black Legion already have their own mini book, and Cypher and Be’lakor already have their own slates, so if GW wanted to release new units and characters, this might be a way to do it. They could actually make more money by incorporating said documents into a new edition of the current book, and by selling them separately as downloads and separate books to those who didn’t buy the new book (if they did their maths right). 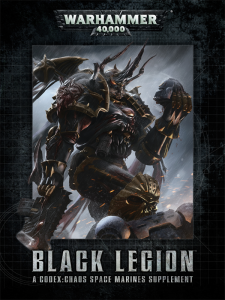 But what would we want to see? Essentially, what many CSM players have been clamouring for is something like what the Space Marines have now. To put it simply: Chapter Tactics. Cult troops provide this to a degree, but they alone don’t provide the coherency that Chapter Tactics do (and they are pretty different ideas, even GW would have to admit). Now, it’s very unlikely that all 9 legions would end the year with a supplement, even if Abaddon’s boys already have one. However, imagine a month of Chaos releases like this:

That would make a lot of people very happy (and probably annoy people who play the other four legions but if you can’t please everyone…) and all those model sets need updating (quite badly in some cases). Add one more week to that schedule and you could bring out a couple of big scary kits too, along with the updated main Codex. It’s not beyond the realms of possibility. 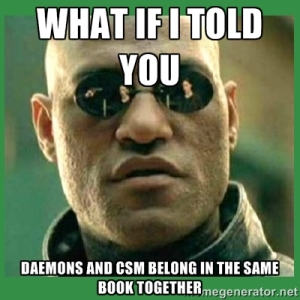 WFB has been given a new lease of life with the end times and the vast, rangy army selections have been simplified somewhat by the idea of combined armies which I don’t think is a bad idea at all. Well, what if 40k went a little more in that direction too, and brought back the idea of Daemons and CSM fighting out of the same book once again? 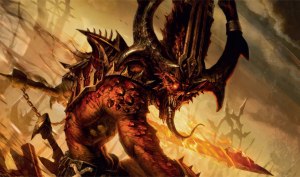 If 40k really focussed on its own brand of the End Times (namely, Abaddon’s invasion from the Eye – the 13th Black Crusade), it would make a little more sense. Not all armies would have to go the same way (I can’t necessarily see all Imperial troops, or even just all the Space Marines in the same book) but who would have guessed all the elves would get rolled into one? Or Warriors, Daemons and Beastmen all going into the same tome? So the idea of CSM and Daemons sharing the same book isn’t that mad at all (in fact, long ago it was the norm), and could help to reinvigorate both armies. It would certainly sell and it would give a lot of new dimensions and formations to those armies borne of the warp.

How Was That For A Fat Slice Of Wishlisting?

Seriously, i have no clue. This post was as much a case of me trying to work out the various possibilities in my head as it was anything else. There’s every chance that we’ll just get another normal codex and a normal release thing and then all the usual moaning when it’s not an overpowered list monster of a book. It would be really nice to have some version of chapter tactics though, and there’s definitely a few things they could fix *cough*mutilators*coughcough*. Whatever happens, I’m just hoping it’s cool enough to make me want to buy it. Onwards!

What are your own fevered imaginations? Have you dreamt up something else for a new CSM codex?

2 comments on “Whispers in the Warp – What Would a New CSM Update Look Like?”