“The existence of Project 135 would be considered outright and undeniable heresy were it not the work of the Ordo Xenos. The splicing of human and Ork DNA is an abhorrent idea, born of unchecked  minds being allowed to work too much in isolation. Designed as a weapon, 135 was conceived to combat the Ork on his own terms, but he should never have been created in the first place and Inquisitor Thor Joshan was entrusted with its termination. However, the Inquisitor went against his own vows and now uses 135 as it was always intended to be used – as a brutal killing machine almost beyond control. Whether these actions were caused by pity, heresy or vanity, the highest ranks of the Holy Inquisition Ordo Xenos hereby declares Inquisitor Thor Joshan to be ‘observed’.”

Didn’t expect that, now did you! 😉 Yes, I am braving the dark dark grimdark world of INQ28 and this is my very first effort in that system – OX135. Let’s look at a few more pics, and I can take you through my thinking (such as it is).

As someone who spends nearly all his time working in power armour (well, I mean i paint it – I don’t sit at my desk in power armour because that would be a bit weird) and the rest of the time on gribbly daemons, I have decided to add some aliens to my portfolio. The theme for my small retinue is based around Inquisitor Thor Joshan, a very unorthodox Ordo Xenos operative who surrounds himself with aliens and those fascinated by them.

OX135 is slightly different though. He’s an experiment that certainly didn’t go wrong (if anything, it worked too well) but isn’t right. Human DNA mixed with that of ork DNA has created a hulking humanoid monster capable of rage, strength and intelligence. Had the project ever been approved (which it never would have been), those following in 135’s oversized footsteps could have proven to be a cheaper, faster to deploy, and more expendable alternative to Space Marines should humanity encounter vast ork hordes in remote space. However, that was never to be, and though the project was ordered to be destroyed, those orders were given to Inquisitor Joshan who had some different ideas. 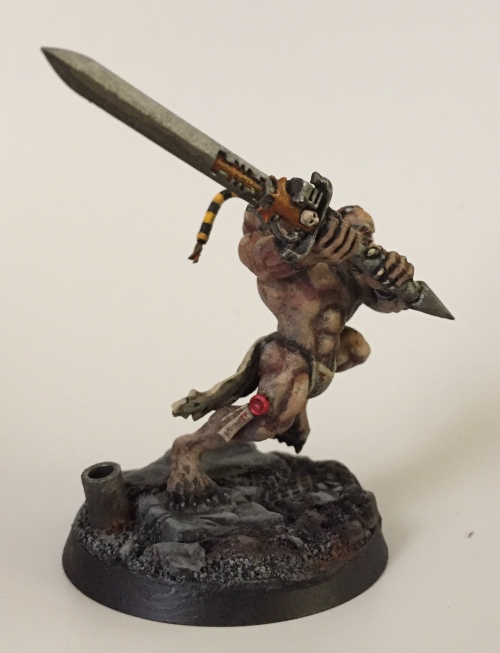 So apart from working on something other than power armour, I wanted to test out my converting too. I’ve invested in a few smaller sculpting tools, some different paints and washes, and I reckon I’ll be getting through a fair few sticks of green stuff over these projects as well.

The keen eyed amongst you will recognise the base model for OX135 – it’s the Savage Orc Big Boss from the fantasy system. I removed the head and cut back the shoulders a bit, as well as removing the axe, and have replaced those components with some from the Grey Knights kits. He now wields a huge blade and there are a few wires here and their, including the kill wire in his back which was supposed to deliver the killing voltage before the Inquisitor earned the beast’s trust by hacking through it at the last possible moment.

My inspirations behind this included Orks and even Space marines, but also things like the Incredible Hulk and Juggernaut from Marvel. But then, when working on INQ28 stuff, the biggest influence has to be John Blanche. I wanted this monstrosity to look like it might fit in one his beautiful and bizarre illustrations. With the loin cloth changed to parchment, and wires, trinkets and tattoos, I hope it does that (at least slightly).

This is also a chance for me to try a completely different style of painting. Rather than the “comic book realism” (if such a thing exists) that I use with my 40k work, I’ve tried to really go somewhere different with this. It’s lots of dry-brushing and washing. It’s leaving parts looking a little rougher to play on the ideas of dirt and shadow, and treating light sources a little differently, looking for contrasts and the curiosities of how the brush moves over the subject. It’s by no means perfect, but as a first attempt I’m very happy with it. In fact, I’d be happy if this was a much later attempt too.

My light source is coming directly from above, as if this brute is fighting his way through an underhive where the only light is second hand and high above. I’ve painted the metals and skin in a completely different way to how I have done previously with the high light source really playing a part in that.

If I had to find one thing about the model that I’m not happy with, it would be the eyes. I tried to go for the bright red eyes of an ork and I’m not sure it works so I may change those to more human shades in the future, but who knows – maybe I’ll learn to love them.

So, there you have it. I have officially embarked into INQ28 and as well as all of my other projects, you can expect some more curiosities from the fringes of the galaxy coming your way soon. Onwards!