I’ve just started working on my Blood Angels Praetor using the big fella from the Betrayal at Calth box set and I just wanted to give you a quick update on my efforts so far. I’m only in the very early stages, but thought you’d be interested in seeing the direction I’m going in with this guy.

To start with, I’ve painted a few bits of the model before even putting it together. The model is now in one piece but there were a few bits I painted separately just because it would be easier to do so. The inside of the gorget, the head, the inside of the hood and the inner lining of the cloak were all done in this stage. The head sits so snug into the armour that a) you can barely see the insides of that hood piece at all, so I just gave that a quick once over, and b) the head would have been a pain to do if it was already put together.

I’ve decided to go with my brassy gold on much of the armour’s trim, and the lining of the cloak is a very subtle black-to-deep-purple colour. I was concerned that this might look a little too much like Emperor’s Children colours, but I think it will be fine. Praetorian purple was a thing 2000 years before GW got hold of it so I’m going with that. Worst comes, I can say it was pre-heresy gift from Eidolon or something like that.

I’m using the above Blood Angels Hero, of 2nd Ed box cover fame, as a source of inspiration for this guy. I won’t be doing like-for-like colours, but the styling will be in part taken from John Blanche’s design. Although I’ve put the guy together, I’ve not started on the armour properly yet, so in future WIPs, hopefully you’ll see more what I mean. And yes, that does mean that there will be a few black flame patterns here and there.

In a rare move for me, I’m working on the base separately from the mini because I’ve gone with quite a complex base, again, with elements from the 2nd Ed box art. Note the wire, the rubble and the skull (well, I always do skulls on bases – I think that’s now a thing) that nod to the above image. I’ve also added the ripped apart Land Raider door for the Praetor to stand on, and a couple of shell casings too. I got a chance to start putting some base colours down this morning and here’s where it’s at right now… 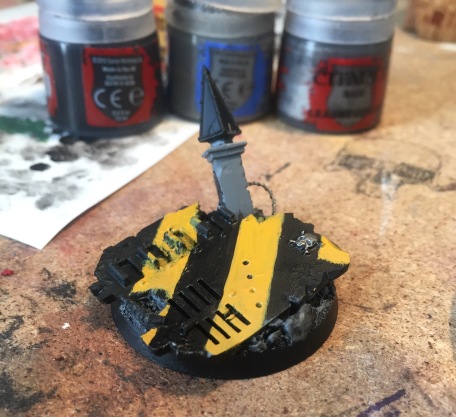 So, very early doors there then (pun intended). Just getting some base colours down to get an idea of what it will look like (a little bit of a test too), but still a huge amount of work to do here. This was a just to give you an idea of the direction I’m going with this. Why an Iron Warriors Land Raider door? Well, a) Hazard stripes do look pretty cool and b) I remember an old, long since retconned bit of fluff that noted the IW and the BA have a particular beef going back to the Heresy. So why not?

Last night, I also got the chance to work on the guy’s cloak as well. Thought you might like to see that… 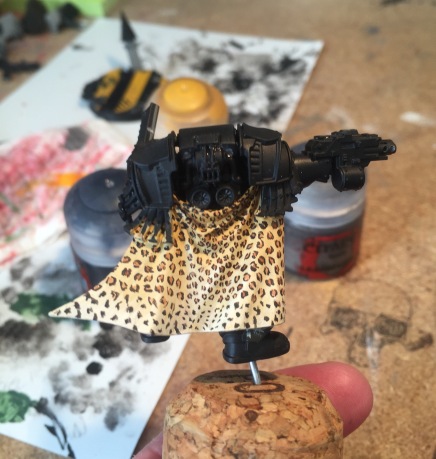 I couldn’t resist. 😉 Will hopefully bring you another update in the near future with a few more fancy details done. Onwards!