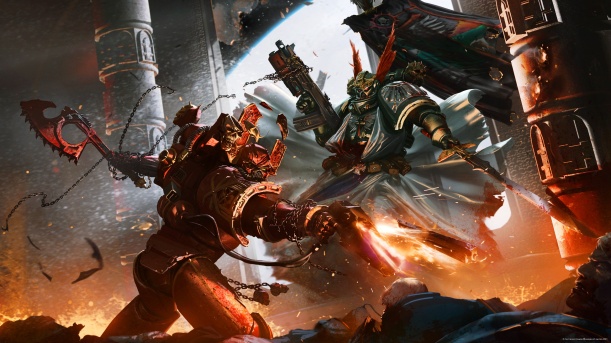 How do you come up with a good Space Marine chapter name?  In this ‘just for fun’ post, I’ve built you not one, but two name generators to help you bestow a monicker onto your Space Marine Chapter, and also your Chaos Space Marine Warband too! How’s that for a slice of generosity on toast?!

I was talking to a few people about my post from last week where I was listing all the things that I liked about Space Marines (because I’m that sort of annoying person who will write a blog post and talk incessantly about it afterwards). When asked ‘how many chapters are there?’ I replied ‘Well, loads. Like a thousand. Maybe more!’. The follow up to this was ‘Well then, were I to create a new chapter, how would I come up with a name that doesn’t already exist?’ to which I then replied ‘…I dunno…’. The truth is, there is nothing new under the Sol, and the likelihood is that when you’ve come up with a name, someone, maybe even GW themselves, got there first.

But in an effort to improve your odds, I have created the Space Marine Chapter Name Generator. It’s not perfect. If your name is ‘Chris Lloyd’ you will end up with the Celestial Lions, and if you’re ‘Sam Smith’, you’ll get the ‘Silver Skulls’, both of which are definitely already taken (and also, I know people called Chris Lloyd and Sam Smith so apologies to them). The sharper among you will  have probably already worked out how this works, so let’s have a look:

Going by the above, my chapter should be the Jade Angels – not bad! What’s yours? Stick a comment below and let me know what you think about it? Also, if you do come up with a name that’s already taken, or if you’re not quite happy with it, try flipping it around and adding ‘of’/’of the’ in the middle. So the Jade Angels become the ‘Angels of Jade’.

But I promised you more, and after making this, with all its noble nouns and heraldic adjectives, the Ruinous Powers convinced me to do the same again, but this time with the Chaos Space Marines. So, for you heretics out there, here you go: 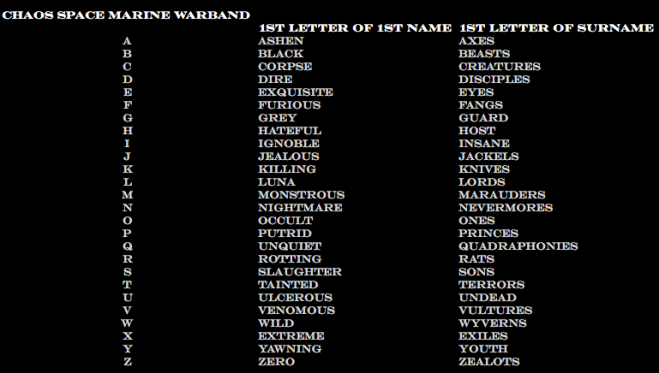 That gives me the Jealous Axes – very Slaaneshi if you ask me. But again, that could be flipped to the ‘Axes of Jealousy’. If you like what you got, stick it in a comment down below. What would your warband be like? Khorney? Nurgley?

And that’s it! No deeper meaning than that – just an excuse to do something fun on a slow weekday, and an added celebration as the Space marines turn 30. If neither of the above are your thing, I did a similar thing for Ork mobs way back when – you can find it right here. I hope you enjoyed them. Onwards!