Happy New Year! Ok, so I’m several days late with that, but I have good news – exciting news even! I have taken my first step into 30k beginning with this, my Blood Angels Standard Bearer.

I am diving head first into the Heresy and I’ve decided that the Sons of Sanguinius will be chosen army because, ever since I saw the 2nd Ed box art, I’ve wanted a Blood Angels army. To that end, I’ve decided to use a lot of the styles in that artwork with this army. Black flames on red, yellow trim and occasional hazard stripes. I originally bought the above mini to be part of my Mortifactors army, but I’ve now decided that he and the Captain that came in the clampack with him will be the first part of this project.

In the image above, I’m most proud of the helmet. The dull green lenses, subtle highlighting… I was a proud man the day I finished that one.

I was also really happy with the red cloak. I was a little worried that red-on-red would get lost, but I think it works. It’s subtle, and as this dude is ‘only’ a banner bearer, it means I’ll be able to make the Captain stand out more by going with a different colour. I also went with a plain metal bolt pistol – the yellow ones from the box art might be a little too retro for this project.

It was another good kit from Forge World. simple to put together, very few holes or lines. Happily it also fits in with the Betrayal of Calth set which I may have purchased already. 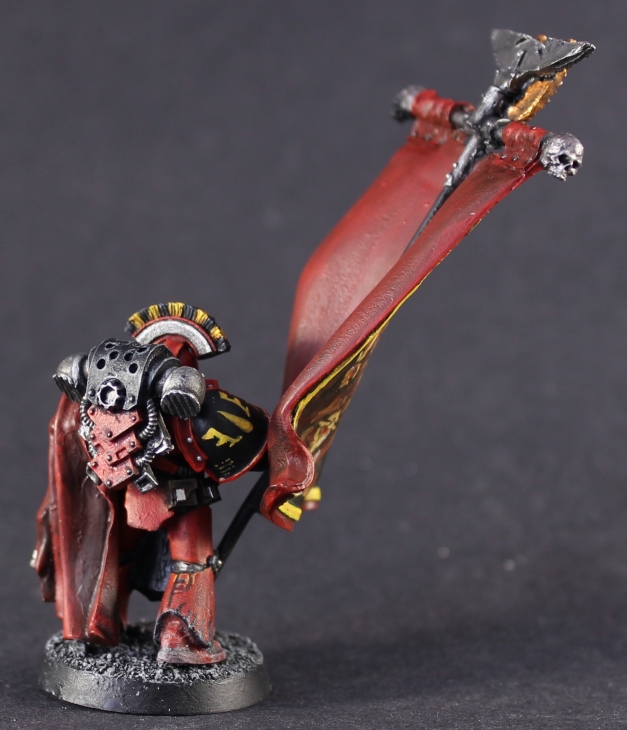 Originally, this miniature was just going to be used as a test piece for the colour scheme – with Chaplain and Praetor in the Calth Box, and the eventual release of Sanguinius himself (one day…), I was alright for HQs. But then I got onto the banner and I think I’m going to keep these guys involved.

As John Blanche’s box art made me want to paint Blood Angels, it’s only right that I pay tribute to the man himself by putting his illustration of Sanguinius onto the banner. Or as close an approximation as I can accomplish with citadel paints on a tiny banner. I also included ‘IX’ to represent the legion number, and ‘XIII’ as I’m going to be working on the 13th Company (because why not). Also, I really wish the banner was a little straighter as it made doing that freehand really tricky. But I think it worked. 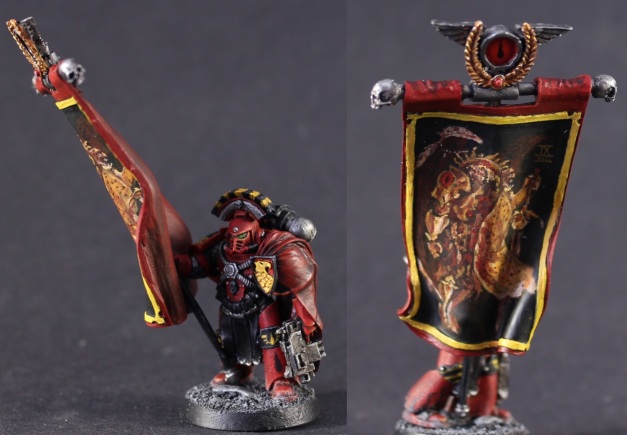