Posted by johnnya10 on 21/04/2015
Posted in: My Painting and Modelling. Tagged: Mortifactors, Space Marines. 4 Comments

Every 1st Company needs its own Terminator Captain, and I’ve happily found mine – Aikos Valedrix. The keen-eyed among you might be thinking ‘hang on, that’s just the Terminator chaplain’ and save a few bits and pieces changing round, you’d be right. It’s the good thing about the Mortifactors really; if it’s got a skull on it, it automatically fits in. In this case, the skull helm looked perfect and I needed a 1st Captain. Done.

I’m really pleased with the overall paint job here, and the minor conversions that went into it. You might notice the removal of an Imperial cross, and a sensor swapped with a skull and really, excluding the arms (we’ll get to those shortly), that’s it. There are plenty of skulls and that’s all you need for the Mortifactors. In terms of the painting, I like the small skull plate over his waist, and I’m also quite proud of his gauntlets too. I spent a long time making sure I got everything right with this guy and while the techniques are all pretty standard, the effort’s there so they can still make the mini pop. Also, I like his glowing blue eyes – very moody.

The axe means he’s going to need his own rules – Terminator Captains apparently can’t carry these (which is just silly), so I’m looking forward to getting those written as they also give me the opportunity to give it a bit of flavour and fluff. So I’m calling that Tezuka’s Axe – the first bit of Posul bronze used in weapon-craft by the chapter’s founder himself as he proved to all his men that the twilight world had something of great value for them. Anyway, the rules are to follow soon. I have to say, the one bit of the model that I don’t like, is the handle on the axe. I need to practice these a bit more as they can be a source of great detail. This one had to be rescued a coupled of times but hopefully it looks ok now.

The other part of the model that needs some rules written for it is the combi-flamer which I’m calling The Dragon of Calth. I’m not thrilled about the blade on this and it might get redone, but I love the overall look of this monstrous weapon. Also, i’m quietly pleased with that skull on the shoulder there – quite a nice one from my ever-growing collection. 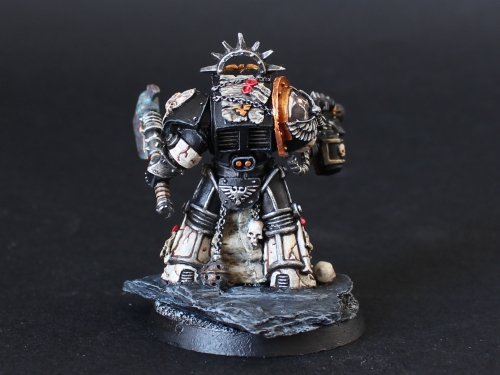 I’m quite proud of all the detail I got on the top of this model too – lots of little lines on that parchment. I should also say that the base is made from a bit of roof slate. It’s a great material that takes paint really nicely and usually provides a nice flat base while still being interesting. This one needed a little putty added as this guy was at one point on tip toes due to a slight slope and that is not a good look for anyone in TDA.

And now, as a small treat shot, here’s a snap of my 1st Company so far. They’re not going to be the biggest part of my force, but they certainly have been a lot of fun to do, and they definitely stand out…

Anyway, this has been a really fun break away from more  unspectacular projects but it’s time to get back to the utility stuff. I’ll look back with a lot of fondness at my time painting this guy up – it has been a blast. Onwards!