Posted by johnnya10 on 12/11/2014
Posted in: My Painting and Modelling. Tagged: Mortifactors, predator, Space Marines. 1 Comment 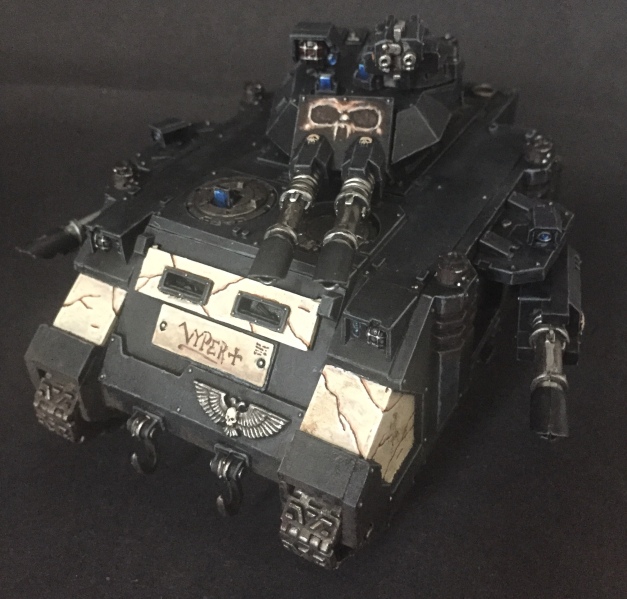 Moving swiftly across the battlefield, its primary target in site, the Mortifactors Predator, Vyper, closes in on its prey. Ladies and gents, may I introduce to you this latest addition to my Mortifactors army. Let’s have a look at some shiny (if slightly poor quality and badly lit) pictures. 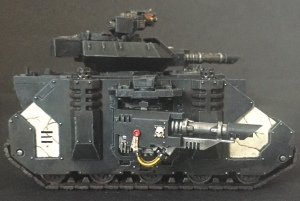 Covered with enough lascannons to do some serious damage to the enemy’s larger, more heavily armoured units and war machines, Vyper (as I have named this one) is some much needed heavy support for my force which at the moment lacks a little in these stakes. I went for the ‘all-las’ load-out and I really like the look of these guns, and the range they give me in the game. 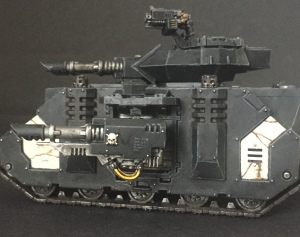 As mentioned in the WIP post from last week, the colour palette has remained the same but I’ve flipped the amounts of each colour I use, with the bone being used as sparing contrast against the predominantly black hull, turret and weapons. I painted the turret and sponsons separately to the hull and I would recommend this – it means you can still move things around and that you can paint in behind and underneath the weapons with ease. 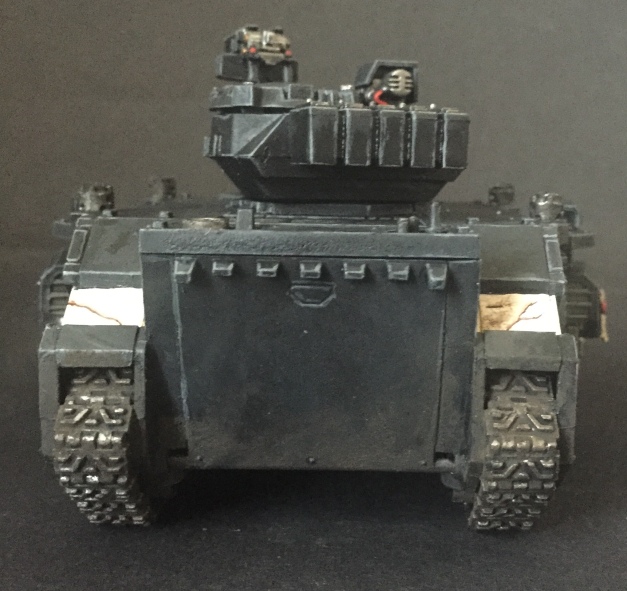 Why am I showing you a big picture of the back end? Well, I wanted to highlight a little more of the weathering that I’ve done on the tank and this picture picks it up quite well. Typhus Corrosion acted as mud for this tank and it’s flecked up all along the hull and on the back door here (as well as all over the tracks). And the black is lighter at the top of the tank than at the bottom with a few splodges and smudges of ink and Abaddon black to give it a dirtier look. Using Eshin Grey, I mixed it up a bit with lighter blends at the top going into darker blacks at the bottom of the tank. I need to clean up a bit of the edging still though (it never ends!) but I think as my first predominantly black big model, this went pretty well. 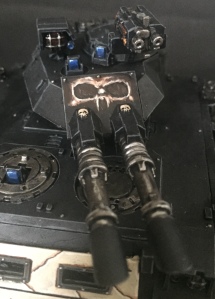 And of course, with this being the Mortifactors, there has to be a skull in there somewhere. This one’s relatively small and understated, but it works great just sat above the main weapon here making the barrels almost look like fangs or tusks. I stuck a storm bolter and flash light on top though the light is just for decoration and the storm bolter gives me better odds in any ‘weapon destroyed’ scenarios. It’s still a darn cheap tank even with that option (considering what it can do with all that firepower). 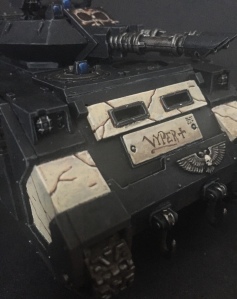 I also wanted to somehow represent that extra point of armour that Predators have on their front armour. To do this, I mounted this ‘plaque’ – a big slab of ceramite – on the front and used it to display the name of the tank too. I wanted to play around with the fonts I use and to use the name of a snake to denote the perceived ‘evil’ and threat of this tank as it skulks around the field looking for the enemy. Not wholly convinced with the font but I can live with it. 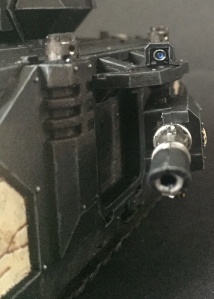 And one thing that I have got really good at that I just wanted to show off a bit is my work on lenses. The one over this lascannon is the sort of little detail that I’m really proud of, and it’s a technique that I seem to just get better at so that’s a win. Always good to end these post work critiques with a positive. 🙂 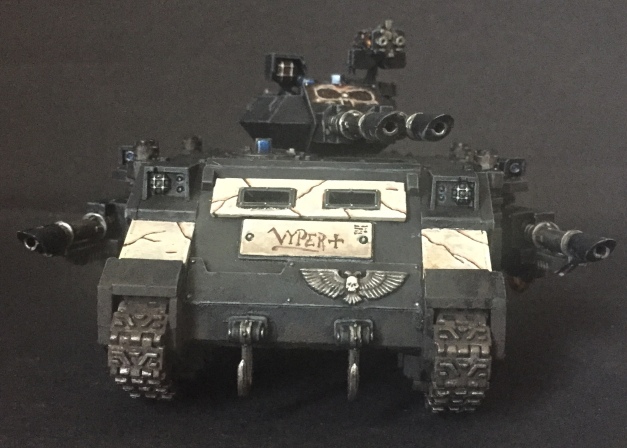 I hope you like it. I’m pretty happy with this tank and though I’m glad to be done, there’s still a bit of armour I need to get through this year. Still, this is something a little bit different but within the theme and I’m glad I got a chance to work on another Predator again – it’s been a while. On to the next project!

I’d love to read your thoughts, comments and constructive criticisms – stick them below!